The Gillam-Grant Community Center addresses and supports our rural population’s ever changing needs by providing both traditional and unique services, education and recreation to sustain and enhance quality of life.

Our Board of Directors:

The Gillam-Grant Community Center was established through the generosity of Grant Gillam. Grant Gillam grew up locally on a farm near Pumpkin Hill and gained his wealth by working his way up the International Harvester Co. advancing to the position of District Manager of Motor Sales for all the agencies west of the Mississippi River.

In 1932, after serving in the Army during WWI, Gillam founded General Management Corp. which provided consulting services to floundering companies. Rustcraft Cards was one of those companies which he used to successfully extend the greeting card and printing business to a worldwide venture resulting in considerable financial gain.

Gillam was well known for his philanthropic activities and the Byron-Bergen community benefited greatly from his generosity and vision. His foundation, United Foundations, Inc. has been providing scholarships to Byron-Bergen Central School students for almost 50 years. He also provided money to build and sustain upkeep of the swimming pool on the Byron-Bergen School district campus.

In 1960, Grant Gillam asked leading community members, “What else can I do for the Byron-Bergen Community?” and he told them to “Dream big.” Russ Gillett and Dick Glazier joined together to come up with an answer to Gillam’s question which resulted in building a  community center to enrich the lives or resident in our rural community. 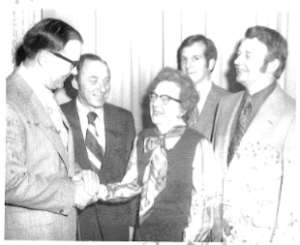 Grant  Gillam died in 1970 and his sister, Margaret, took on the project and along with Russ and Dick as well as others in the community. This team spent countless hours putting together a concept that would fulfill Gillam’s vision. In 1973, the Gillam-Grant Community Center opened, with its ribbon cutting ceremony in 1974.

Reflecting on the community center’s past years, Dick Glazier stated, “It is very gratifying to see that the Gillam-Grant Community Center has been an important part of Byron-Bergen now for almost 40 years and has continued to evolve to meet the needs of the community as Grant hoped it would.”

Help us keep Grant Gillam Legacy live as the community center continues to improve the quality of life in our community for many decades to come. Come join us and become part of our family.